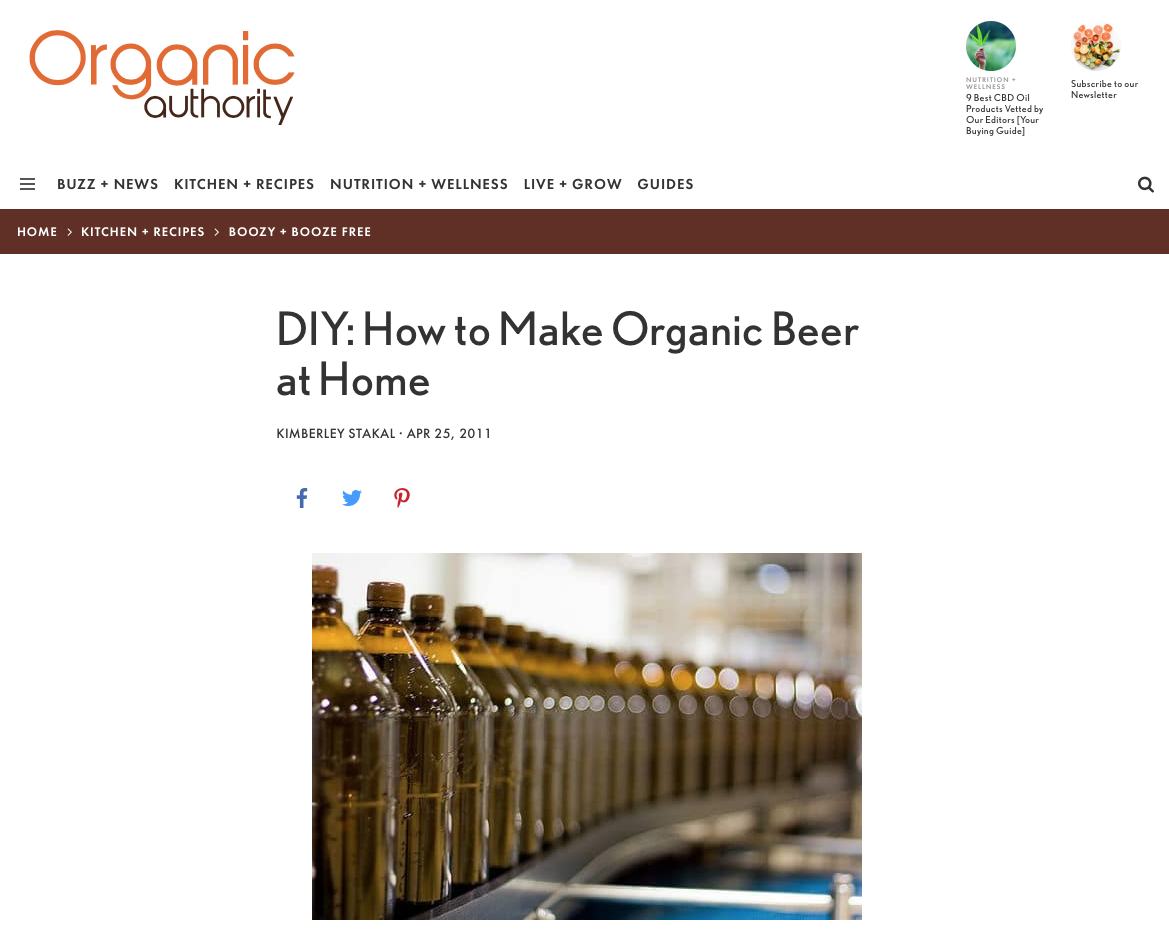 So, you’re ready to embark on the exciting journey of organic beer home-brewery. Congratulations on your step towards making handcrafted beer; you’ll be rewarded with a superior beer that’s full of flavor, personality and nutrition. Yes, nutrition! A good small-batch beer contains iron, magnesium, bone-protecting silicone and heart-protective antioxidants. Choose organic ingredients for a beer that’s not only better for your body, but also for the land that the ingredients came from.

To craft an organic beer, you could purchase a more simplified organic beer kit, but today, you’ll be doing the whole thing from scratch. So go on, clean out your bath tub and gather your empty recycled bottles, because you’re getting a lesson in DIY beer-making.

In short, you’ll combine the water and malted grains in a large non-aluminum pot and bring them to a boil. The mixture is cooled and the hops are added; afterwards, the yeast is added. From there, your mixture goes into sanitized airtight containers, and the waiting process begins. It takes about one to two weeks for the yeast to do its work, and it will eventually fall to the bottom of the container. Finally, the mixture is bottled in sanitized bottles for your enjoyment.

But that’s the extremely shorthand version of how it works. There are, to be perfectly frank, far more details that go towards perfecting the home brewery process. It’s not easy to start, as most worthwhile things aren’t. Check out these in-depth procedures and tips from Seven Bridges Cooperative, and don’t miss their page on specific recipes.

1) Prep: Start with tap water, as distilled water is devoid of natural minerals, which you want. Just boil the water off first to get rid of chlorine, and then allow to cool. Sanitize everything! From pots to utensils and hand towels, make sure everything is completely free of bacteria, or else it can go into your beer and spoil the whole thing (sad). You have the choice between using a malt extract or extracting malt from grains yourself, which takes more time but is more effective for brewing a quality organic beer. See the difference between the two here.

2) Mash: The mashing process is just cooking your malted grains in a large pot of water. You’ll need to crush your malted grains before soaking them, and depending on the recipe you’re using, you may need to roast them, as well. Grains are soaked in water just around 150°F, which is a bit below a simmer, and far below a boil, but definitely warm enough to activate the sugars.

3) Sparge: Sparging is the part of the process where you rinse off the sugars from the soaked grain. To do this, the soaked grains are placed in a draining vessel called a lauter-tun, or you can substitute a 6-gallon bucket with holes drilled into it for draining, and placed inside a larger bucket, to catch the liquids. A separate amount of warm water, called the sparge water, is poured over your mash mixture inside the draining bucket, and the fermenting sugars rinse down into the second catch-all bucket, while the grains remain to be discarded. Go ahead and compost the leftover sparge grains, they’ll make for great mineral food. The whole sparging process can take about 1 or 2 hours, so be patient.

4) Intermission: Alright, you’re almost there. Now you’ve just got to boil and cool your sparging product, called the wort. Boiling takes out the bitterness, kills unwanted organisms, and helps to settle proteins. Boil for 1 to 2 hours, adding any hops called for in your recipe. Then cool the wort mixture as quickly as possible to reduce bacteria contamination. Fill a tub or large sink with ice water (be liberal with the ice), and submerge your wort pot right into the water, letting the temp fall quickly.

5) Ferment: Congrats, you’re ready to ferment. You’ll need your sterilized fermenting container ready to go, and a clean strainer to strain out the whole hops from the last step. Shake the unfermented beer to get the oxygen lively, add the yeast, and place in a dark place to ferment for about 4 days. For a superior beer, it’s recommended to do a second fermentation, but that part is up to you. Once the foam on your first fermentation has subsided, transfer the beer to a second fermentation container, and let it ferment for another week or so—you’ll know it’s done when there are slow, clear bubbles.

6) Bottle it up! Bottle your beer into sanitized bottles, without letting any oxygen into the bottles, and let them sit out for a couple of days. Transfer them to the fridge and leave them there for a few more, until the beer looks clear and bubbly. You’ve got organic beer, baby!