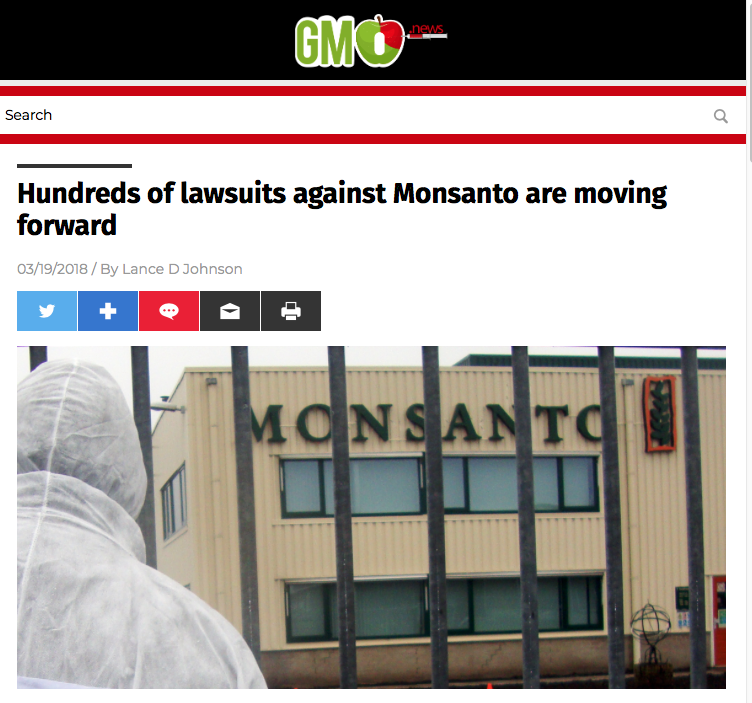 Hundreds of lawsuits against Monsanto for personal injury and wrongful death are moving forward, after scientific analysis was heard in court, detailing Roundup’s carcinogenicity. Expert opinion on Roundup’s glyphosate toxicity could be allowed at trial against Monsanto, pending the judge’s final decision. The first trial in the Roundup litigation is set for June 18, 2018, in the Superior Court for the County of San Francisco.

The stakes are high for hundreds of farm families that have lost loved ones to a specific kind of cancer called non-Hodgkin lymphoma. This cancer is more prevalent in farm workers. Over 365 lawsuits are waiting to be taken up by a U.S. District Court in San Francisco. The lawsuits claim that Monsanto’s Roundup herbicide caused their loved one’s cancer and that Monsanto covered up the risks. The court pledged to take up the cases as one, only if there was enough evidence of glyphosate’s carcinogenicity.

The second week of March was an important time. The court dedicated the entire week listening to scientific evaluation of glyphosate, the principal component of Roundup. Epidemiologists, toxicologists, and biomedical statistical analysts testified before the court, brought forth their procedure, and provided evidence of glyphosate’s harm to humans. Judge Vince Chhabria presided over the case and must now decide whether the lawsuits against Monsanto can move forward. The implications of these lawsuits are enormous, for more than 3,500 cases are waiting to be heard in state courts, alleging Monsanto covered up Roundup’s cancer risk. The video footage of the court proceedings was made public and are available at USCourts.gov.

For so long, the world took Monsanto at its word, that Roundup was 100 percent safe for humans. Now their widely used herbicide is finally being questioned by experts, grieving families, and most importantly – the courts. The greatest evidence brought forth was from Dr. Chadi Nabhan, an oncologist with 17 years of clinical practice and academic research focused on lymphomas. He discussed the 2015 International Agency for Research on Cancer (IARC) findings and their sound procedures, dating back to 1965. After rigorous study, the independent research body classified glyphosate as a “probable carcinogen” in 2015. Dr. Nabhan says that the IARC findings are convincing and it’s something that “patients should be aware of.” This is a critical issue for Monsanto, for they do not disclose the carcinogenicity of glyphosate. (Related: Evidence the corrupt EPA colluded with Monsanto to delay toxicology review of their controversial herbicide glyphosate.)

Nearly a third of Monsanto’s revenue is derived from glyphosate-based products. If the mega-corporation is found guilty, farming will be revolutionized across the world, especially in the U.S. where Monsanto’s genetically modified seeds are systematically designed to withstand their blockbuster chemical glyphosate.

The world could finally witness a court ruling that vindicates victims of Monsanto’s herbicide. People may finally learn the truth about Roundup — it is poison, a cancer-causing agent to humans. If Monsanto is found not guilty in the face of mounting evidence, then nothing will stand in their way. Roundup, already being measured in organic foods and human breast milk, will get the green light to intoxicate every last corner of the natural world, destroying not only plant life, but also destroying the protective microorganisms that live in the human gut.

Keep up-to-date with the details of this case at U.S. Right to Know, and read more news about pesticides at Pesticides.news.