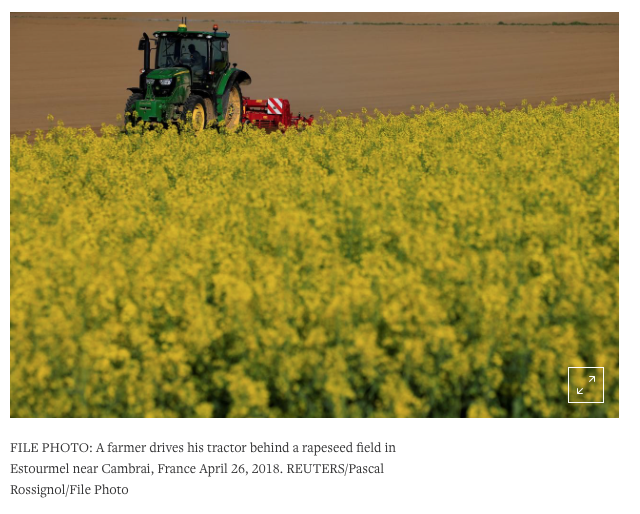 PARIS (Reuters) – Bayer said on Wednesday that farmers in France and Germany were digging up thousands of hectares of rapeseed fields after traces of genetically modified organisms (GMOs) banned for cultivation were found in seeds sold by the company.

GMO crops are widely grown across the world, but they remain controversial in Europe, where very few varieties are authorized for growing and some countries like France have completely outlawed their cultivation, citing environmental risks.

Checks by the French authorities during the autumn showed minute quantities of GMO seeds, estimated at less than 0.005 percent of the volume, in three batches of rapeseed seeds sold under the Dekalb brand, Catherine Lamboley, Bayer’s chief operating officer for France, said.

Dekalb was previously a Monsanto brand before the U.S. company was taken over by Bayer last year.

The GMO found, which is a rapeseed variety grown in Canada, is not authorized for cultivation in Europe, although it is allowed in imports destined for food and animal feed, Lamboley said.

Bayer issued a product recall but some of the seed had already been sown, representing about 8,000 hectares in France and 2,500-3,000 hectares in Germany, which are in the process of being dug up, Bayer said.

It was not yet known what caused the contamination of the rapeseed seeds, produced in Argentina in a GMO-free area, Lamboley said.

“We decided to immediately stop all rapeseed seed production in Argentina,” she told Reuters in a phone interview.

Bayer’s Argentine rapeseed seeds were destined for the European market and represent 12 percent of its rapeseed supply for France, the company added.

Bayer declined to estimate the overall cost of the GMO contamination but said it will offer compensation of 2,000 euros ($2,277.80) per hectare to affected farmers, suggesting a payout of around 20 million euros in France and Germany.

The compensation reflected the loss of rapeseed fields this season and the fact farmers would not be able to grow the crop next either as a precaution to avoid re-emergence of the GMO strain, Lamboley added.

The order to destroy some crops is another blow for European rapeseed growers who had already cut sowings sharply due to dry weather.

However, the area is small compared to the total French winter rapeseed area, which the farm ministry in December forecast at 1.23 million hectares. The corresponding German crop area is seen at close to 1 million hectares.