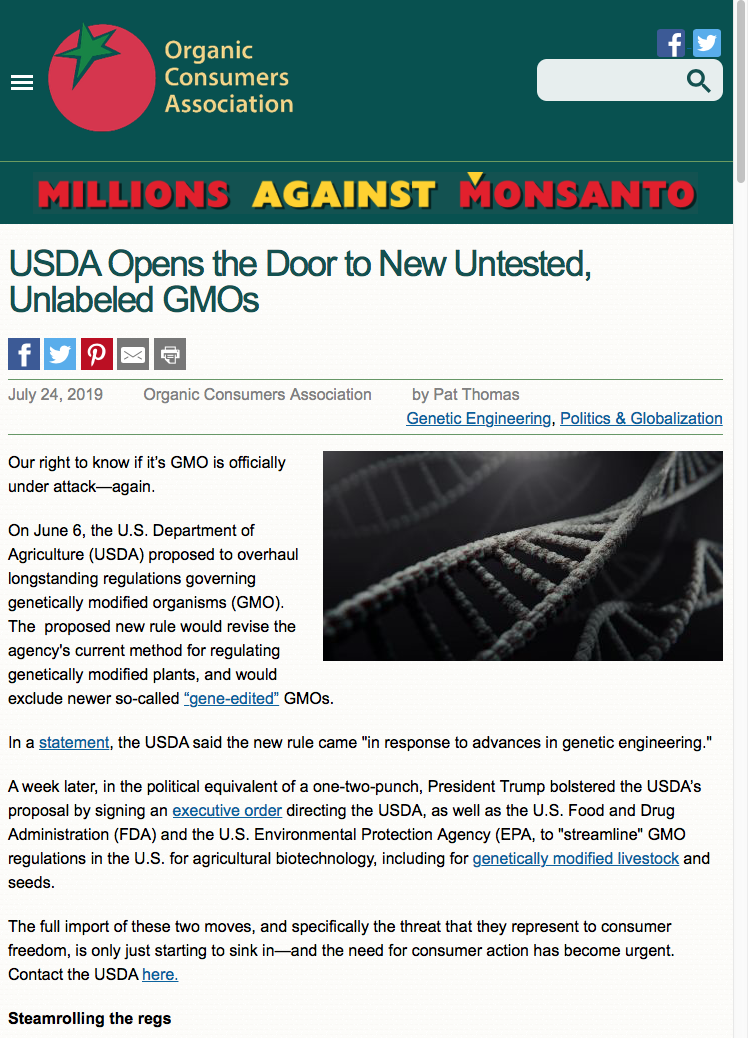 Our right to know if it’s GMO is officially under attack—again.

In a statement, the USDA said the new rule came “in response to advances in genetic engineering.”

A week later, in the political equivalent of a one-two-punch, President Trump bolstered the USDA’s proposal by signing an executive order directing the USDA, as well as the U.S. Food and Drug Administration (FDA) and the U.S. Environmental Protection Agency (EPA, to “streamline” GMO regulations in the U.S. for agricultural biotechnology, including for genetically modified livestock and seeds.

The full import of these two moves, and specifically the threat that they represent to consumer freedom, is only just starting to sink in—and the need for consumer action has become urgent. Contact the USDA here.

According to the USDA, it’ proposed new rule—the “Movement of Certain Genetically Engineered Organisms”—aims to make the process of approving GMOs Sustainable, Ecological, Consistent, Uniform, Responsible, Efficient, which is why it has been given the nickname the SECURE Rule.

If adopted the new rule would mark the first significant revision of USDA’s biotechnology regulations since they were established in 1987.

In reality, SECURE is akin to driving a steamroller through the regulatory system. If approved, most consumers will be left without a clue as to whether or not their foods have been genetically engineered.

USDA argues that the process of genetic engineering has changed dramatically over the years and that current regulations don’t reflect those changes. New technologies such as CRISPR make genetically engineering food faster and simpler. Scientists argue that they can make big changes to plants and animals my making small precise changes in the genome—changes they say are more like ‘tweaking’ or ‘editing’ rather than ‘engineering. That’s why they have given these new techniques the media friendly name “gene editing” (GE).

Scientists also argue that the gene editing process is “close to nature”—or at least close enough—that it shouldn’t require oversight or labeling.

The truth is, that while the technology has certainly advanced, gene editing is still genetic engineering. It is still prone to all the same problems—for instance unpredictable effects in the organism itself, in the wider environment and for human health—as other forms of genetic engineering. Most importantly it is far too novel and untested to simply give it a free pass in the regulatory system.

USDA says that plants and animals with traits “similar in kind” to modifications that could be produced through natural and traditional breeding techniques should be exempt. But this is just rewording of the tired old “substantial equivalence” dictate which says that no matter how it was produced, if it looks like an apple or a fish it must be an apple or a fish.

Accepting that these new gene-edited plants and animals are “similar in kind” to natural food means that far fewer genetically engineered plants would need federal approval—or notification—before being brought to market. In fact, under the new rulings biotech companies will be allowed to regulate themselves. They can “self-determine” if their gene edited plant or animal fits this category.

Removing regulatory barriers will reduce the cost of developing new GE foods. So at a time when we desperately need more farmers to care for our land and produce healthy nutritious food, we could see instead more GE food developers taking control of our food supply.

“It should come as a surprise to no one that, under the Trump administration, the biotechnology industry is basically getting its way on every policy issue and policy forum,” said Charles Benbrook, agricultural economist, organic proponent and one of the expert witnesses in support of Lee Johnson Roundup trial. “But as in the past, the real constraints will be the willingness of consumers to buy new products that haven’t been adequately tested and of course, whether the food industry and farmers will actually embrace the new technology.”

In addition to a mandate to remove the “undue burdens” of regulation from gene-edited foods, the President also ordered the relevant agencies to produce “educational materials” that “clearly communicate the demonstrated benefits of agricultural biotechnology”—to be used in both science education and consumer outreach.

The order states that the agencies: “shall develop an international communications and outreach strategy to facilitate engagement abroad with policymakers, consumers, industry and other stakeholders.”

But this education package isn’t intended solely for consumers in the U.S. The order further mandates that the agencies spread the GMO gospel internationally by developing “an international strategy to remove unjustified trade barriers and expand markets for products of agricultural biotechnology.”

But hang on a minute

In the President’s imagination this vast propaganda exercise will “increase international acceptance” for GMOs and open up vast new markets for U.S.-produced GE crops and animal products.

Certainly ongoing trade disputes between the U.S. and China have seen the U.S. casting around for new export markets. The Chinese have a stricter approval process for GM crops, licenses are granted for short periods of three years.  U.S. companies and farmers complain that these limits stall trade by restricting the sale of new products from companies such as DowDuPont, Bayer and Syngenta.

But a simple reality check reveals that the “don’t ask don’t tell” approach to new GMOs proposed by the USDA is not only out of step with what consumers want, and with USDA organic standards, it’s completely out of line with the regulatory requirements in the European Union (EU)—America’s biggest trading partner. Colorful leaflets and happy-clappy infomercials about the benefits of GMOs are not likely to change that.

New U.S. labelling requirements are also out of step with those in the rest of the world. From January 1, 2020, the USDA will require some—but not all—genetically engineered products to carry the Bioengineered (BE) label. Those made using gene-editing technologies are likely to go unlabeled, but as Benbrook notes “just because they’re not labeled in the U.S. doesn’t mean they won’t be labeled in other countries.”

As a regulatory term, the word ‘bioengineered’ is meaningless outside of the U.S. (and some would argue inside the U.S.) and the EU does not distinguish between gene editing and genetic modification. Those products would either not be allowed or could require extra certification before they can be exported to countries with stricter regulations.

An example of this is the Calyxt GE soybean which can be sold in the U.S. without labeling but which, under EU law is a GMO and has not been approved for sale there.

All is not lost

Although they support each other, Trump’s seemingly hastily thrown together executive order is ultimately of less concern than the changes proposed by the USDA.

According to Michael Hansen, PhD, Senior Staff Scientist at Consumer Reports, “This is all part of the strong deregulatory stance of this administration, which wants to take safety assessments away from the government and put it in the hands of the companies.”

“The thing that just baffles me,” says Benbrook “is that the industry appears to not have learned anything from the really disastrous rollout of these technologies in the past. From bovine growth hormone to the GE tomatoes, the Arctic Apple and the AquaBounty salmon, consumer skepticism has delayed the marketing or direction of these products, or even made them obsolete.”

Once the USDA regulations become final it is highly likely that civil society groups will challenge them through the courts. But consumers can also help shape the outcome. Members of the public can (and should) submit commentsabout the proposed new rule to the USDA until August 5.

Now is the time to let the USDA know that we will continue to meet these new untested, unlabeled food products of biotechnology with skepticism and the demand that regulators fulfill their primary function—to be gatekeepers, not doormen.

Pat Thomas is a journalist, author and campaigner specializing in food, environment and health. See more on her website. To keep up with Organic Consumers Association (OCA) news and alerts, sign up for our newsletter.

Thanks to BF for sharing this link with us at ZERO-GMO!